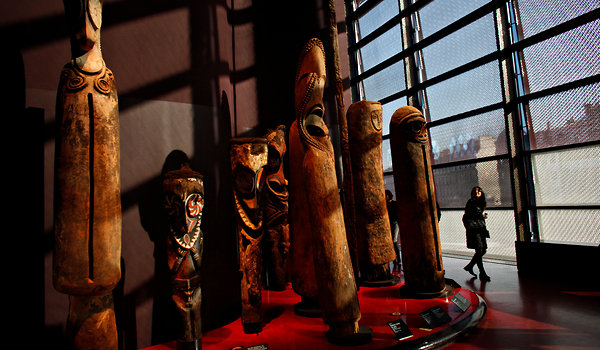 This poem was inspired by a work trip to Wewak, in the East Sepik Province of Papua New Guinea. It is partly written in Tok Pisin and in English. It was written for a particular audience and a particular purpose so no attempt at translation has been made. This also marks my first attempt at writing a poem in Tok Pisin.

The constant rhythm changes in the second stanza (english) were intentional to illicit a conflicted psycho-emotional response from the reader/ audience that ‘something is not right here’. Jumping between Tok Pisin and English was used to show the two worlds I constantly find myself confronted by. I find myself being modern and western but at the same time, looking back over my shoulder to a world I cannot negate nor forget; it is non-western but complete.

“Pay before you enter”, so I lost my last penny.

To enter the big house,

To read the false story.

About the artefact that made my story

an irony…that now you tell me my story,

about tools my ancestors made.

Tools you bought for pittance

and trade for a days wage.

This is the pre-emption to the poem.

While in Wewak, I was joined for lunch by an uncle of mine. Over lunch at the local gem, Boutique Hotel, we stumbled onto a conversation that really struck a chord. Looking around the room at displays of artefacts from the Province, we talked about children growing up today having little or no recollection of how these tools, now artefacts, were once used widely by our past generation.

We talked about how in New Zealand and Australia, a whole indigenous cultural revolution was taking place, where, because of the effects on Imperialism and Colonisation, a search for the past was underway and gathering traction fast.

It was slightly perplexing then in Papua New Guinea’s case where Imperial colonisation did not have as much an impact on our native culture. To the extent where it did, the best of my knowledge does not give me reason to believe that the waitman succeeded in stopping us from practicing our culture(s).

Yet, I am lost as to why we feel that we are losing our culture. At the very least, there is a generation that cannot recall the cultural significance of how certain tools, or artefacts, were used for beyond commercial value as items for tourism.

So while all these ancient tools make their way into personal collections and museums around the world, my conscience is troubled that my stori will increasingly be told as someones adventure into the wilderness of Papua New Guinean, returning with the trophy – an artefact. Where my story becomes reduced to being a mere dinner table conversation of that time they ventured into the wilderness – my homeland, and saw the other – my people. That our next generation will be told that they were mystical savages who fought each other for mythical beliefs.